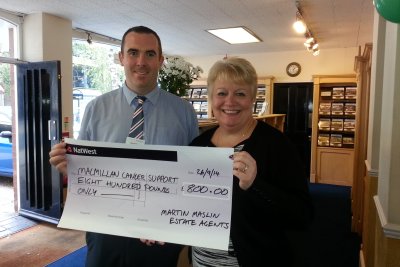 Usually on a Friday morning the staff at Martin Maslins are busy arranging viewings for the weekend ahead, agreeing sales and processing house completions. Last Friday however was a break from the norm when they were one of many companies up and down the UK that hosted a Coffee Morning in conjunction with MacMillan’s World’s Biggest Coffee Morning.

The staff donned their pinnies, reached for their recipe books and did their best impression of Mary Berry and Paul Hollywood. The staff’s hard work was complimented by generous donations from Morrisons Supermarket and Delilicious, all food produced was then available for visitors to buy or win with all donations going to MacMillan Cancer Support.

During the morning Maslins were visited by friends, family members, local businesses as well as their valued customers. Amongst the treats that were available to buy were a Bakewell Tart, Cupcakes, Tiffin, Flapjack, Banana Bread and many other delicious items. There was also a Silent Auction for two ‘Showstopper’ cakes, a raffle, a ‘sweepscake’ and guess the number of sweets in a jar.

Organiser and partner at Martin Maslins, Lynn Hudson said, “we are overwhelmed by the amount of support we have received this morning, the office has had a lovely buzz and it’s nice to see so many people trying to make a difference. Once we had returned back to the usual office layout we began the task of counting the money raised, the total kept rising and we were staggered to learn that the final figure was £800 – this was a lot higher than we had ever imagined”

Dan Holland who is the sale manager at Martin Maslins and joint organiser was equally jubilant, “when we first decided to take part in this I expected to raise two to three hundred pounds so to make £800 is mindblowing. This charity is very close to my heart and is always my first choice charity so to be able to make a sizeable donation means the world to me. I would like to thank all of my colleagues for their time and effort in supporting this and also of course everyone that attended and their amazing generosity.”